NEW ALBANY — Annette Wiseman lined up with eight of her nine kids to get a hot breakfast Saturday at the New Albany Elks Lodge following two hours of shopping at Walmart.

The 26th annual New Albany Elks Clothe-a-Child event took children and their caregivers to Walmart to buy $130 worth of new clothes, shoes and coats. They returned to the lodge to see Santa, get a toy and eat.

Wiseman said her husband is a disabled veteran who will graduate soon with a bachelor’s degree. She is also in college. Both are unemployed.

“I like how the community came together to help the children, because it really does help. That was like they invested $1,000 into my children. How amazing is that?” Wiseman said as her children waited in line to see Santa.

Her youngest, 2-year-old Izabella, was walking around with one sandal on. The other one kept falling off since it was broken. Wiseman said she was able to get her daughter new shoes that will be perfect for winter during the event.

She said seeing everyone work so hard to make sure her kids were taken care of was touching.

“This is the true meaning of Christmas,” Wiseman said.

This year, 148 children were helped over the course of two Saturdays. Ed Snelling, president of the Elks, said the children were all referred to the program by school counselors and principals.

Snelling said the group spends about $23,000 on the annual event, with those funds raised mostly through their annual golf scramble in the summer.

“We’re all about community and this is our way of giving back,” he said. “When you see their smiling faces, that’s all the thanks we need.”

Five-year-old Leland Werner grinned big as he sat on Santa’s lap, ready to ask for what he really wanted for Christmas.

“A real airplane!” Werner exclaimed. “I want to fly in it!”

Shortly afterward, his 7-year-old sister opened her gift from the man in red.

“Wow! My present is a skateboard!” Bailee Werner exclaimed excitedly.

Their mom, Krystal Werner, said this event really helps out.

“Having three kids and trying to maintain a budget, it’s tight,” Krystal said. “[This event] means a lot to me. I really, really appreciate it. God works in mysterious ways.”

“I’m humbled. We’ve had a really rough year,” Johnson said, adding that she has always helped others in the past when she could. “When I have it, I try to help someone else.”

The event was run by volunteers, mostly Elk members.

“It’s great. It’s been really enjoyable,” said Elks member Bill Spriggs. “The people really appreciate it and we feel good about being able to help someone.”

“This is such a rewarding experience, just to see the joy on their faces,” said Elks member and volunteer Linda Spalding. “It actually makes my Christmas.”

Even Santa is an Elks member. Kent Wells has been the event’s Santa for more than 10 years.

“My joy is being Santa for groups of kids that wouldn’t otherwise get to meet Santa,” he said.

Snelling said he hopes when these children grow up, they will consider giving back and possibly becoming Elks themselves.

Amerra Wiseman, 14, said she was so touched to be included even though she is a teenager, she hopes to help other kids once she is older.

“It makes me want to do this when I get older,” Amerra said. “I want to help other people like they’ve helped us.”

Six-year old David Thompson sits on Santa’s lap to tell him what he wants for Christmas. The New Albany Elks Lodge hosted their 26th annual Clothe-a-Child event Saturday, helping 148 children throughout the course of two weekends to get new clothes and a toy for Christmas.

Elks Lodge 270 We are open to the public for lunch and dinner.


The first full week of every month is Make One Meal Matter at Elks Lodge 270.  Proceeds of meals go to a selected charity each month. 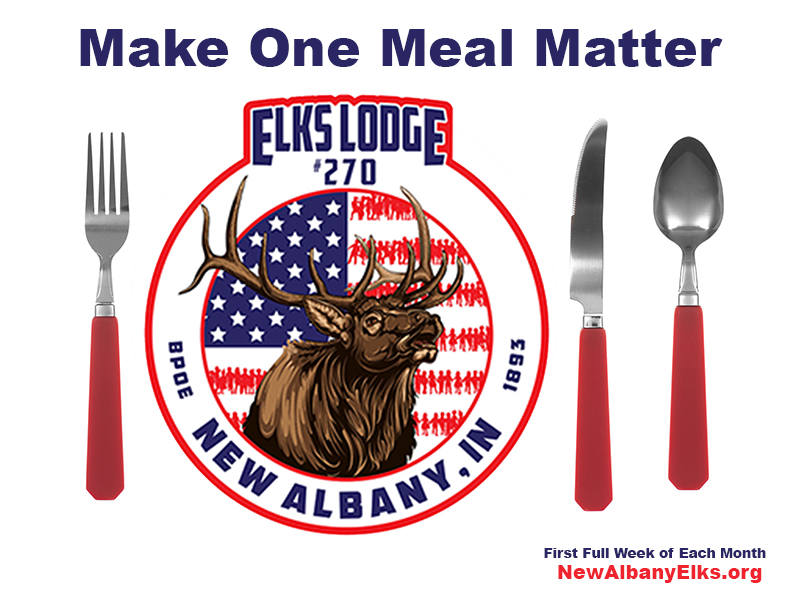 Our catering department creates delicious meals for any events. Contact us to learn more

Join our lodge to make a difference in your community.

Come to the Elks Lodge every Friday night for a delicious dinner prepared by Chef Dave.  Please RSVP early.  All dinners are open to the public.  Make your

Come to the Elks Lodge every Friday night for a delicious dinner prepared by Chef Dave.

Please RSVP early.  All dinners are open to the public.